Arkas Line received the World Ports Climate Initiative’s Environmental Ship Index Award. In support of the initiative to increase ships’ contribution to sustainability under the mantra “green harbour and green ship”, Arkas Line intends to reduce carbon emissions for 2020 by 25%. 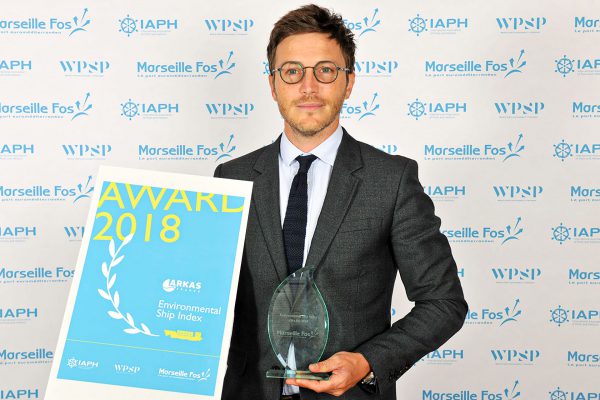 The World Ports Climate Initiative (WPCI) started by the International Association of Ports and Harbours established the Environment Ship Index (ESI) in 2008 to combat against climate change and improve air quality.

At the Environmental Ship Index Awards event that is organized every year, Arkas Line was granted an award for its contributions to the initiative this year.

During the event organized by the Marseille Grand Maritime Port (GPMM) which is one of the members of the World Ports Climate Initiative (WPCI) that was started by Le Havre, Bremen, Hamburg, Anvers, Amsterdam and Rotterdam ports, Marseille Port CEO, Hervé Martel, presented the award to Arkas France Sales and Marketing Director, Etienne Snijders.

At his speech during the event, Arkas France Sales and Marketing Director, Etienne SNIJDERS said: “Our industries must be the driving force regarding protection of the environment, a pressing issue which became a part of our daily lives. At Arkas, we are working hard at this point and showing a good performance by respecting the rules and environmental standards. However, we are also making investments by foreseeing these standards beforehand. In this scope, we are gladly embracing all sustainable initiatives which bring environmental awareness and economic development closer to each other, and feeling proud to receive this award from the Marseille Port officials.”

The Environmental Ship Index prepares a report on the greenhouse gas emission of a ship by evaluating the nitrogen oxide (NOx) and the sulphur oxide (SOx) amounts emitted by the ship.

The new generation-eco design ships in Arkas Line’s fleet which are furnished with advanced technology possess engine features and a ship design that are in sync with the international standards on world maritime energy efficiency.’’ When compared to the old generation ships, the ships with machines allowing slow fuel consumption are providing a fuel consumption saving up to 25% and bring toxic gas emissions to the environment to a minimum.

Being the only Turkish ship owner & operator company that is a member to the Clean Cargo Working Group (CCWG), Arkas Line has decreased the carbon emission in its Europe-Africa and Intra Med & Black Sea lines by 21.26% since 2011, through the steps it took towards decreasing the greenhouse gas emissions in its ships. Therefore, it raised and fixed the rate for the year 2020 to 25% – which was previously 20%.